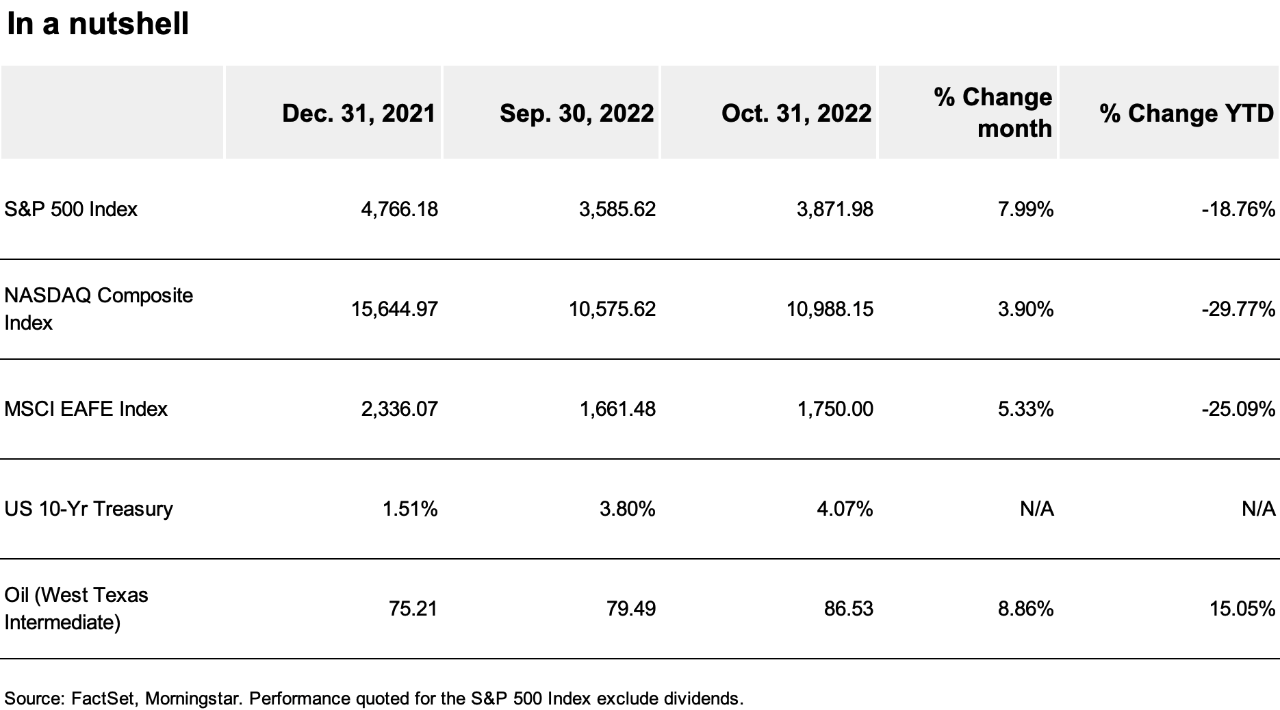 With inflation still hovering around 8%, the Fed raised rates another 0.75% November 2, bringing its total rate increase for the year to 3.75%. Rising rates have not only jarred the equity market, but they have also caused bond prices to plunge, credit card interest rates to climb, and mortgage rates to more than double to about 7%.i On the flip side, income investors finally have some good investment options after years of historically low yields.

After its latest rate hike, the Fed teased that it may take a step back to see how the economy is responding to the rate hikes before deciding on further actions, but it indicated that more hikes could follow if necessary. However, before any additional hikes, the Fed said it “will take into account the cumulative tightening of monetary policy, the lags with which monetary policy affects economic activity and inflation and economic and financial developments.”

The annualized increase in the cost of goods and services has continued to hover at just above 6%, according to the U.S. Department of Commerce. The price index for gross domestic purchases increased 0.3% in September and was up 6.2% from a year earlier (5.1% excluding food and energy). The personal consumption expenditures (PCE) price index, which is one indicator of inflation, increased 0.6% in September, although when factoring in the effects of inflation, “real” disposable personal income was up only 0.3% for the month.

Manufacturing activity continued to expand for the 29th consecutive month in October, but at the lowest rate of growth since the start of the pandemic, according to the Institute for Supply Management (ISM) manufacturing report November 1. The report also noted that order backlogs have been declining, supply prices have been dropping, and supply delivery times have improved.

Outlook: Volatility in the stock and bond markets is expected to continue as the Fed pursues its monetary tightening policy to fight inflation. This may lead to weaknesses across the economy – particularly if the Fed continues to raise rates.

Part of the Fed’s plan for slowing the economy would include a slowing employment market. But with more than 10 million job openings, the job market may be the last area affected by the monetary tightening policies. Aggressive wage demands from workers may be the biggest challenge in fighting inflation. Average hourly earnings for U.S. workers have been increasing at an annualized rate of nearly 5%, double the average rate of wage growth experienced over the past decade.

Commodities prices have dropped significantly but remain elevated, and supply delivery times are improving, which could drive down costs and reduce inflation.

International risks remain elevated, as European and Asian markets continue to struggle with inflation, supply issues, and the economic impact of the war in Ukraine.

With mortgage rates on the rise, the housing market has already seen a decline in new mortgage applications and housing starts in recent months, which may continue in the months ahead.

Stock market valuations, which have fallen from peak levels reached before the Fed began its monetary tightening policy, are currently much more attractive. For long-term investors, the current stock market environment could be seen as an opportunity to take advantage of lower prices.

Bond market investors may also have one of the best buying opportunities in years at current interest rate levels, including double-digit yields for some high yield corporate bonds. Credit spreads, an indicator of risks such as default, have widened but remain below recessionary levels. We expect spreads to widen into next year as the economy slows before stabilizing and rallying.

We expect the Fed to pause its rate hikes early next year and cut rates later in 2023, but the Fed has been clear that it will continue its restrictive monetary policy until inflation shows clear movement back toward its long-term target of 2%.

The stock market posted strong gains in October after a significant drop through most of 2022, driven by inflation and the Fed’s monetary tightening policy. The S&P 500 Index was up 7.99% for the month, from 3,585.62 at the end of September to 3,871.98 at the October close. The total return of the S&P 500, including dividends, was 8.10% for the month. Year to date, the total return is still a negative 17.70%. (The S&P 500 is a market-cap-weighted index that represents the average performance of a group of 500 large capitalization stocks.)

The NASDAQ Index also had a solid month in October, up 3.90%, from 10,575.62 at the end of September to 10,988.15 at the October close. Year to date, the NASDAQ was still down 29.77%. (The NASDAQ – National Association of Securities Dealers Automated Quotations – is an electronic stock exchange with more than 3,300 company listings.)

Retail sales were unchanged from the previous month in September, as rising prices helped hold consumer spending in check, according to the Department of Commerce retail sales report issued October 14. Compared with the same period a year earlier, however, retail sales were up 9.2%, as the effects of the pandemic slow-down continued to fade.

The economy added 261,000 new jobs in October, according to the Employment Situation Report issued November 4 by the Department of Labor. It was the 22nd consecutive month of job growth in the U.S.

Job growth continued despite the Fed’s efforts to tighten the money supply and cool off the economy. The unemployment rate moved up slightly from 3.5% in September to 3.7% in October, as more individuals entered the work force.

All sectors gain ground in October

Energy, up 24.96% for the month of October, Industrials, up 13.92%, and Financials, up 11.99%, led all sectors of the S&P 500 for the month. Each of the 11 sectors was in positive territory in October, with solid gains by the Health Care, Consumer Staples, Materials, and Information Technology sectors. 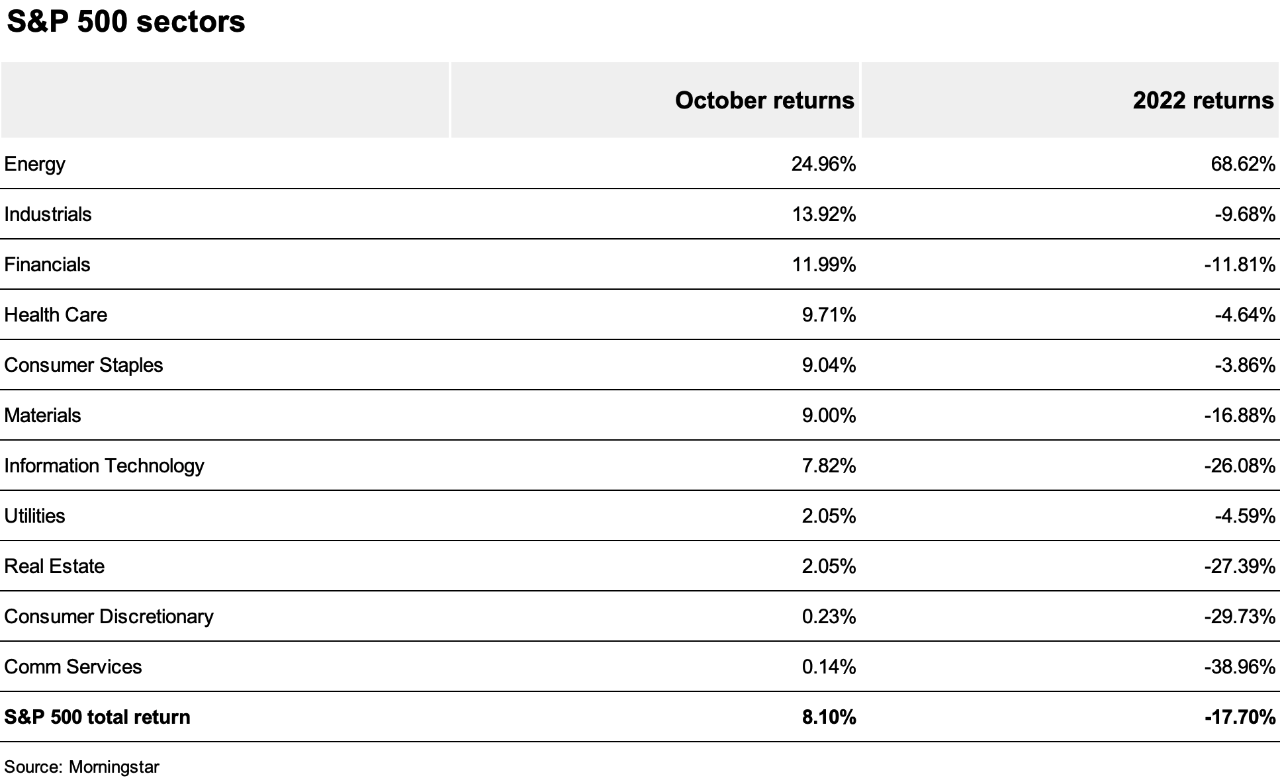 Bond yields continued to move up in October as the Fed continued to raise rates. The yield on 10-year U.S. Treasuries rose 0.27% for the month, from 3.80% at the end of September to 4.07% at the October close. So far this year, the Fed has hiked rates 3.75% in an effort to bring inflation under control.

Oil prices head back up

After dropping 15.48% in the 3rd quarter, oil prices moved back up in October over concerns that oil producing nations will cut production. West Texas Intermediate, a grade of crude oil used as a benchmark in oil pricing, rose 8.86 in October, from $79.49 at the September close to $85.53 at the end of October.

OPEC+, a consortium of oil-producing nations, recently announced plans to cut production quotas by two million barrels a day beginning in November, which could keep oil prices on the rise.

Gasoline prices at the pump also edged up in September after a 24.36% drop in the 3rd quarter. Prices rose 1.44% in October from a national average $3.83 per gallon at the end of September to $3.89 at the October close.

After a tough year in the market, caused by rising inflation and the war in Ukraine, international stocks enjoyed a strong month in October. The MSCI EAFE Index, which tracks developed-economy stocks in Europe, Asia, and Australia, moved up 5.33% in October, from 1,661.48 at the end of September to 1,7500.00 at the October close. However, year to date, the index is down 25.09%.

All information and representations herein are as of 11/07/2022, unless otherwise noted. 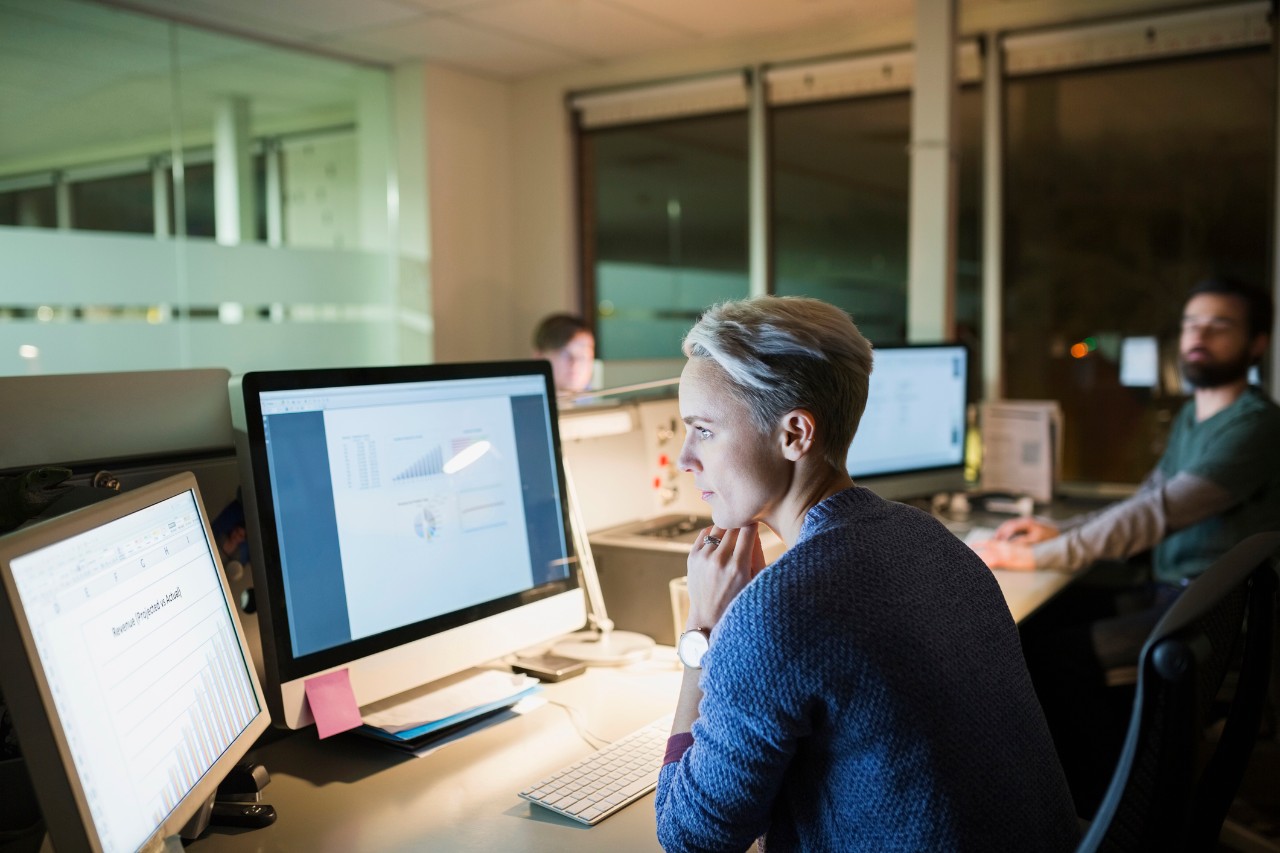 Over the past year, the fixed income markets have experienced one of the largest and swiftest increases in bond yields on record. Bonds, which historically have provided stability and income in a diversified portfolio during equity bear markets, have done neither in 2022.

Over the past year, the fixed income markets have experienced one of the largest and swiftest increases in bond yields on record. Bonds, which historically have provided stability and income in a diversified portfolio during equity bear markets, have done neither in 2022.