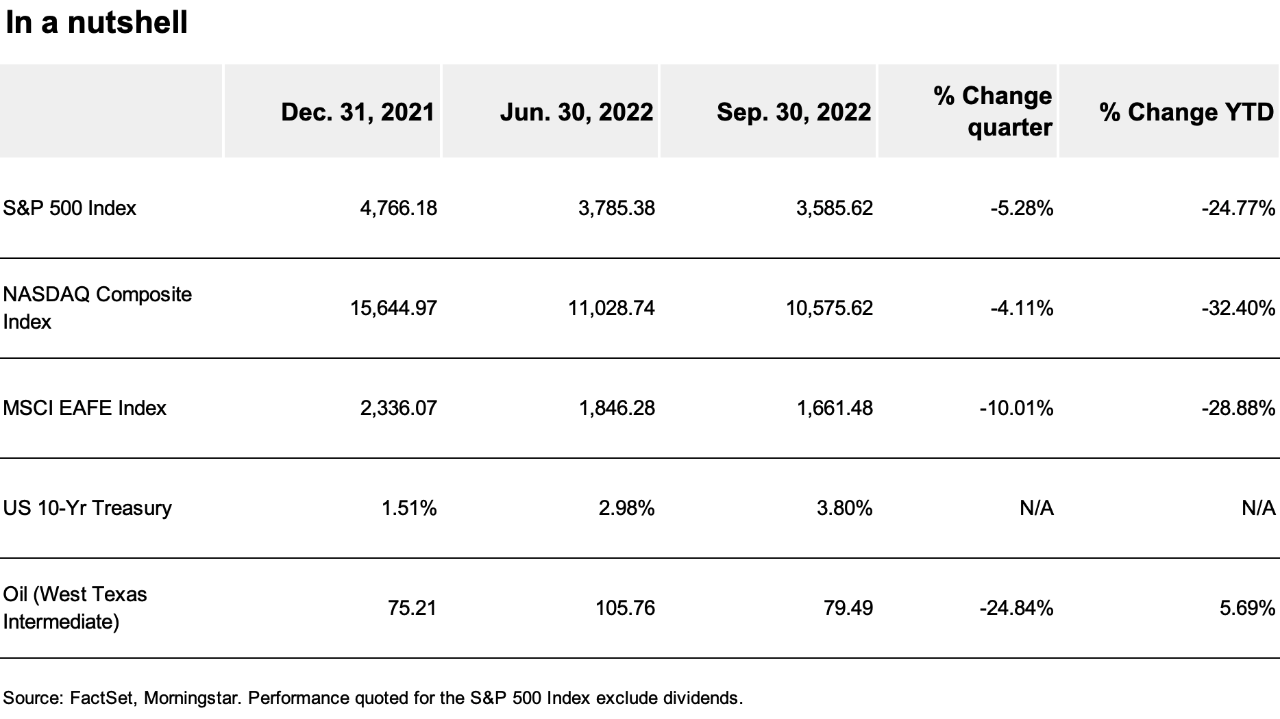 Stock and bond prices have plunged, housing sales have fallen as mortgage rates climb, gasoline prices have dropped, job openings are starting to dwindle, and the manufacturing sector is showing some early signs of weakness.

Dire as that scenario may seem, it’s exactly what the Federal Reserve (Fed) had in mind when it undertook its monetary tightening initiative. But the ultimate goal of the policy – curtailing rampant inflation – is still a work in progress.

The Fed has indicated that it will continue to bring the pain in the form of ongoing rate hikes until inflation is under control. The Fed raised rates an additional 0.75% in September, pushing the total increase for 2022 to 3.0%.

While there are signs that inflation may be abating, there’s still plenty of room for improvement. The annualized increase in the cost of goods and services has continued to hover at just above 6%, according to the U.S. Department of Commerce. Personal consumption expenditures (PCE) increased by 0.4% from the previous month in August, personal income increased 0.3%, and disposable personal income rose 0.4%. The PCE price index, which is one indicator of inflation, was up just 0.3% in August, but it was 6.2% higher than a year earlier – or up 4.9% excluding food and energy.

The Consumer Price Index (CPI), another inflation indicator, was up just 0.1% in August compared with the previous month, but it was up 8.3% compared with a year earlier, according to the U.S. Bureau of Labor Statistics.

Housing prices have already started to decline, according to the Federal Housing Finance Agency (FHFA). In July, the U.S. house price index posted its first month-over-month decrease since May 2020 (during the peak of the pandemic), with prices dropping 0.6%. However, with mortgage rates more than twice as high as they were a year ago, according to Freddie Mac – from 2.87% in September 2021 to 6.7% in September 2022 – the decline in home prices is expected to accelerate in the months ahead.

The robust job market finally showed some signs of weakness in August. Job openings declined from about 11.2 million in July to 10.1 million in August, according to an Oct. 4 report from the U.S. Bureau of Labor Statistics.

While manufacturing activity continued to expand for the 28th consecutive month in September, the rate of growth was the lowest since May 2020, according to the Institute for Supply Management (ISM). The report also noted that new orders declined in September, while production edged up modestly.

The economy added 263,000 new jobs in September, according to the Employment Situation Report issued October 7 by the Department of Labor. It was the 21st consecutive month of job growth in the U.S.

The job growth came despite the Fed’s efforts to tighten the money supply and cool off the economy. The unemployment rate moved down slightly from 3.7% in August to 3.5% in September, returning to its July level.

The chart below shows the results of the 11 sectors for the past month, the 3rd quarter, and year-to-date: 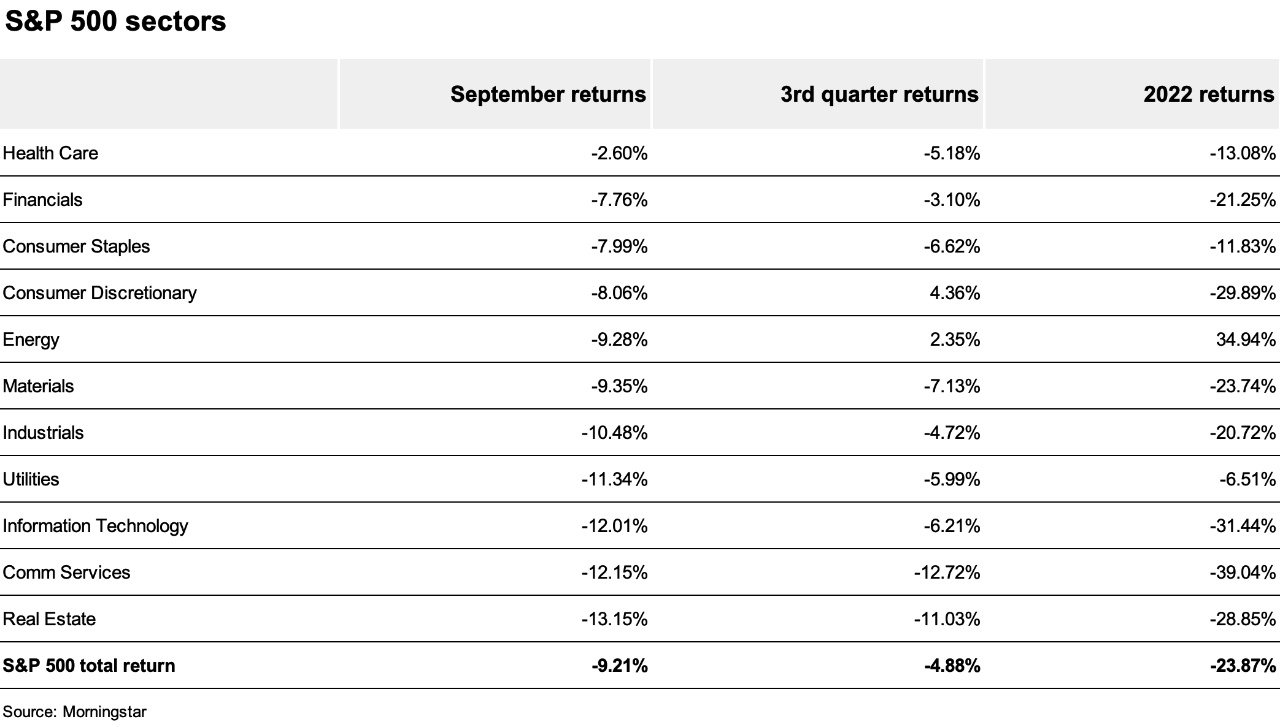 Bond yields continued to move up in the 3rd quarter as the Fed continued to raise rates. The yield on 10-year U.S. Treasuries rose 0.82% in the 3rd quarter, from 2.98% at the end of June to 3.80% at the September close. So far this year, the Fed has hiked rates 3.0 % in an effort to bring inflation under control, including a 0.75% rate hike in September.

The forward 12-month earnings yield for the S&P 500, which is the inverse of the P/E, edged up for the quarter, from 6.34% at the end of the 2nd quarter to 6.61% at the September close. The 12-month forward earnings yield can be helpful in comparing equity earnings yields with current bond yields. While bond yields have increased significantly this year, the earnings yield is still well above the 3.80% market rate of 10-year U.S. Treasuries.

Dollar moves up versus Euro and Yen

After reaching a high of well over $100 a barrel, oil prices finally dropped in the 3rd quarter over rising concerns of a potential global economic slowdown. West Texas Intermediate, a grade of crude oil used as a benchmark in oil pricing, dropped 15.48% in the 3rd quarter, from $105.76 at the end of the 2nd quarter to $79.49 at the September close.

But OPEC+, a consortium of oil-producing nations, announced plans recently to cut production quotas by two million barrels a day beginning in November, which could drive oil prices back up again.

With the war in Ukraine continuing to be a drag on the European economy, international equities followed the lead of U.S. stocks in the 3rd quarter, as the MSCI EAFE Index dropped 10.01%. The index dropped from 1,846.28 at the end of June to 1,661.48 at the September close. Year to date, the index is down 28.88%. (The MSCI EAFE Index tracks developed-economy stocks in Europe, Asia, and Australia.)

What’s ahead for the economy and the markets? See: 4th Quarter Market Outlook, The end of the bear market hinges on these 4 key factors, by Steve Lowe, Chief Investment Strategist, Thrivent Asset Management

All information and representations herein are as of 10/07/2022, unless otherwise noted.