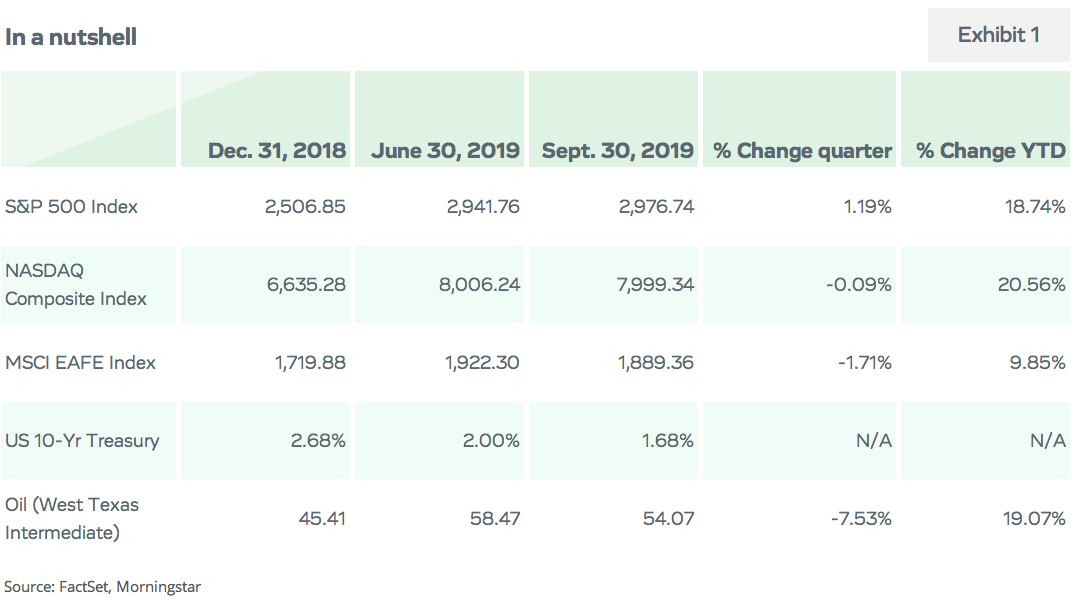 The 3rd quarter was marked by tariff disputes, a slowing global economy, stock market volatility, and two rate cuts by the Federal Reserve (Fed) that helped drive down bond yields.

Here are some other recent economic highlights which are covered in greater detail later in this report:

For the year, the NASDAQ is still up 20.56%. (The NASDAQ – National Association of Securities Dealers Automated Quotations – is an electronic stock exchange with more than 3,300 company listings.)

Total retail sales for August were up 0.4% from the previous month as internet sales continued to show strong gains, according to the Department of Commerce report September 13. Sales were up 4.1% from a year earlier.

U.S. employers added 130,000 new jobs in August, and the unemployment rate remained at 3.7%, according to the U.S. Bureau of Labor Statistics Employment Situation Report issued September 6.

Average hourly earnings increased by $0.11 for the month to $28.11. Over the past 12 months, wages have increased 3.2%. The number of unemployed persons was essentially unchanged at 6.0 million.

Most sectors move up

The only sector that lost ground for the month of September was Health Care, down 0.17%.

The chart below shows the results of the 11 sectors for the past month, the 3rd quarter and all of 2019: 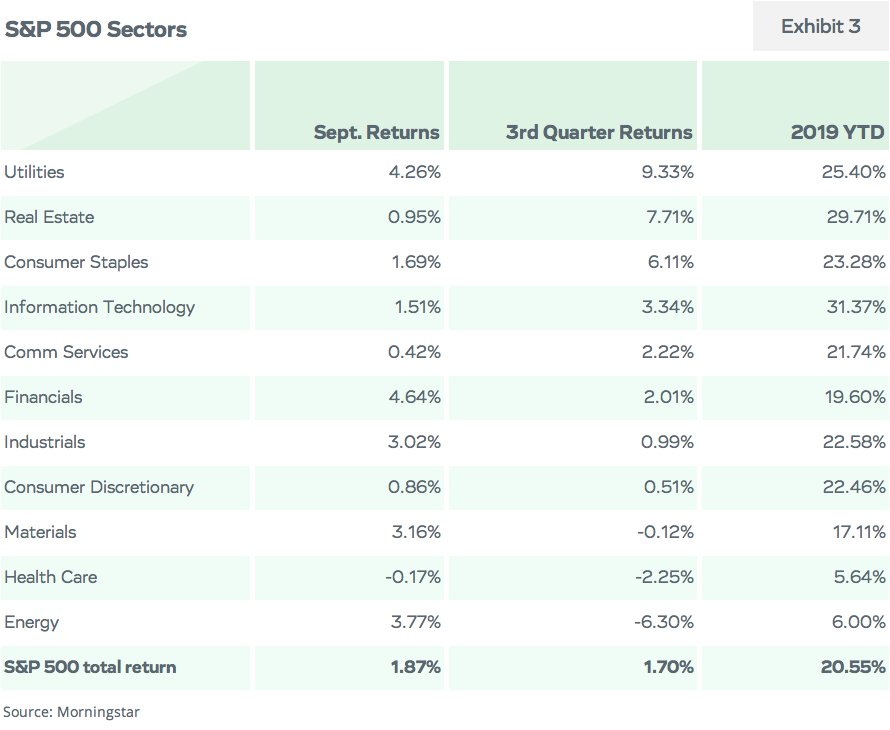 The yield on 10-year U.S. Treasuries dropped during the 3rd quarter as the Fed made two small rate cuts. The yield fell from 2.00% at the end of the 2nd quarter to 1.68% at the September close.

After strong corporate earnings growth throughout 2018, projected earnings growth has slowed down significantly in 2019. The estimated 12-month forward earnings per aggregate share of the S&P 500 was up only 1.93% through the first three quarters of 2019.

The 12-month forward price-earnings ratio (P/E) of the S&P 500 held steady in the 3rd quarter as stock market performance stalled. After closing the 2nd quarter at 16.75, the P/E inched up to 16.82 at the close of the 3rd quarter.

The forward 12-months earning yield for the S&P 500, which is the inverse of the P/E, ended the 3rd quarter at 5.96%, which was little changed from the 5.99% yield at the close of the 2nd quarter. The 12-month forward earnings yield can be helpful in comparing equity earnings yields with current bond yields. The S&P 500 earnings yield is still significantly higher than the 1.68% rate of 10-year U.S. Treasuries.

Dollar mixed versus Euro and Yen

Aside from a quick spike in oil prices after the September 14 attack on the Saudi Arabian oil fields, oil prices trended down through the 3rd quarter. The price of a barrel of West Texas Intermediate, a grade of crude oil used as a benchmark in oil pricing, closed the 3rd quarter at $54.07 – down 7.53% from the 2nd quarter close of $58.47. For the month of September, oil was down 1.87%.

The MSCI EAFE Index, which tracks developed-economy stocks in Europe, Asia and Australia, rebounded modestly in September after dropping nearly 3% in August. The index was up 2.54% in September, finishing the month at 1,889.36. For the 3rd quarter, the index was down 1.71%, but it is still up 9.85% for the year.

What's ahead for the economy and the markets? See: Can consumers keep economy rolling as manufacturing slows? by Mark Simenstad, Chief Investment Strategist, Thrivent Asset Management

All information and representations herein are as of 10/03/2019, unless otherwise noted. 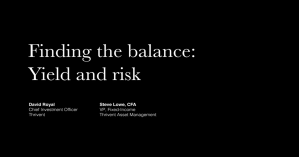 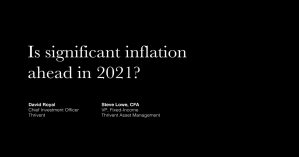 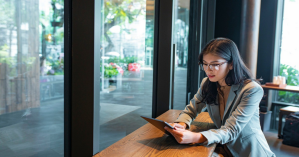